Alberta tar sands. Wouldn't it be better to just use the gas and forget about the oil?

Keystone XL Pipeline was discussed on Diane Rhem a while back.

The show moved on to other aspects of the XL Pipeline issue, rather than talking more about the gas used, but I was left with questions. How much natural gas is used for the amount of oil extracted?

Some folks advocating the pipeline see it as a way to keep our economy going while we transition to cleaner energy. For transition fuel to greener energy, wouldn't we be better off just adapting more of our transportation system to burn natural gas instead of petroleum?

Does the oil have to be extracted to produce the gas? Is it really worth it?

Questions for both US and Canadians as the decisions about the tar sands and the pipeline are mulled over.

Ironically, I was listening to a talk earlier today and the guy was talking about how during the gas shortage of the 70's the oil rigs couldn't get enough gas to make the oil or whatever, I might have my nouns mixed up. But, certainly, there's a point where it seems backwardsly wasteful.

My response: Natural gas could have been used for years as a fuel for the oil pumps. With the tar sands, even more natural gas is used to pump steam into the ground and loosen up the oil. One caller to the show mentioned the law of diminishing returns.

I believe Obama has been making that grand Canada-Texas pipeline anything BUT a reality. It would be a great job creator though. Though, do you think oil prices will go down or there will be more oil here if America suddenly gets direct access to things like that or starts drilling more oil? No, anything America creates will be shipped far away. Like trees in Washington. Do you think they keep them in Bellingham? Only after China has stamped them.

My guess is the XL Pipeline would moderate the rise in oil prices. Prices would be lower than they would be if it wasn't built, but the general trend is that the prices are going up anyway. World oil is running out and getting progressively harder to extract and world demand increases. While the pipeline might reduce the inevitable price increases, the prices would, most likely, still go up; they would just go up a bit slower. The people would grumble and say, "we built this pipeline and are still paying higher prices."

Due to global warming worries, I still think I'm against the pipeline, but I don't have a real strong feeling about it. I know it would be real tempting to build as it plugs right into the economy conveniently. They say most of the oil would be used in the US.

It goes to Texas as that's where much of our "east half of USA oil refining infrastructure" is already located. Also, on it's way, it goes past North Dakota which is bursting with domestic oil fields looking for a pipeline to plug into. The Bakken Shale fields are in North Dakota. The pipeline would be for both domestic and Canadian oil. Today, North Dakota ships some of it's oil by rail.

Since we live in a world oil market, some of the oil might be exported through the Gulf Of Mexico, but that all ebbs and flows with the world market. They say most of the XL Pipeline oil would be used domestically. There's plenty of demand in USA. If Canada builds a pipeline west to the BC coast, most of that oil would be sent to Asian markets, most likely, and some to the US west coast, plus, of course, Vancouver.

While tempting to build and plug in to our existing economy, it's still a global warming menace. We are a hungry species. The bottom line is, people will always be complaining. Maybe I'm a bit cynical this early in my day, but on one positive note, I find the geography of these things quite interesting.

They may say most of the oil would be kept here, I've heard that too but I don't believe it, as that sort of contradicts Obama's plan to make the U.S. the number 1 oil producer. What good is being the #1 producer if you don't sell the oil? We may make enough now to not worry about exporting, but when you tap into all that oil that suddenly looks like a great thing to put on the world market. Yes, it's getting harder to extract, though there is still so many untapped resources in the Arctic. And, they - even they really wanted - could put pipelines off the shore of America (which Obama has also been stopping, though he's giving money to South American countries who ARE building offshore drilling sites). Though, I think that does more harm than good in the long term. And, we need to ween off of oil if anything not suck what remains out of the ground that only hurts the environment in the long term (I'm surprised it hasn't done more damage, aside from spills).

Even if we become the world's number 1 producer of oil again, we might not export that much since we are such a big consumer. We are (or soon close second to China) by far the largest consumer of oil. We can be the largest producer and still consume all our own oil. We used to import 2/3rds of the oil we consumed, but now we produce more so we only have to import around 45% of what we consume if my numbers are correct.

This pipeline is mostly about bringing Canadian oil to US so it might not count that much in making us the biggest oil producer again. It's Canada producing, however it would go past North Dakota where American production is gearing up as well. We are still too dependent on oil, but riding my bike helps a bit. News item: Bellingham just got 8 new Hybrid buses to add to the fleet. Using less oil at least. http://www.westernfrontonline.net/news/article_34735ab4-6fa5-11e2-a467-001a4bcf6878.html Hybrid buses roll into Bellingham Eight new hybrid buses entered the Whatcom Transportation Authority’s fleet

Being number 1 oil producer (not necessarily number 1 oil exporter however) does kind of contradict Obama's push for clean energy. I had forgotten if he was pushing that also. Well, I'm remembering the "Carter Synfuel debacle." After 1970s oil shortages, President Carter pushed for alternative energy and conservation, but also pushed for research on synthetic fuels. Basically grinding up shale, developing tar sands and cooking out the oil. Also revisiting the turning of coal into gas, which had been done earlier (for instance old gasification plant where Bellingham's Boulevard Park is today). The Carter Synfuels went bust as soon as less expensive traditional petroleum hit the market again. Today, the attempts to push up America's domestic production of fossil fuels is mostly private as the price is right (higher gas prices) and technologies such as fracking coming on line. If Mr. Clean Fuel Obama doesn't have much backbone, he's basically just going along for the ride as our private fossil fuel economy is doing this on it on its' own. 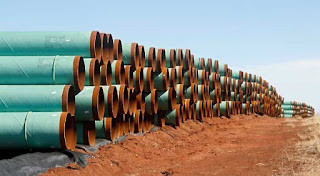