July 20th 1969 was part of the summer between my 8th and 9th grade years. I watched the all day coverage of the moon landing, but just before Neil Armstrong was to step down that ladder, a vacuum tube gave out in our television and the TV went dark.

We got in the car and headed across town to some friend's place that had a working TV. We got there in time for the reruns.

My two sisters were less enthused about the space program than me. They weren't planning to watch it anyway. Instead, they were driving across the state from Pullman to Seattle. When Armstrong stepped down that ladder, one of my sisters said that she took a picture of a drive-in in Ellensburg where they had stopped for dinner. That was to capture the moment.

Meanwhile, my parents and I were on our way to our friend's house with a working TV. Those friends were named, The Stevenson's. The father of that family had died earlier, but he was a big figure at WSU in Pullman. The Stevenson Dorm Complex is named for him. 3 13 story dormitory towers and a dining hall. Yes, growing up in Pullman, one can know people who have university buildings named for them. 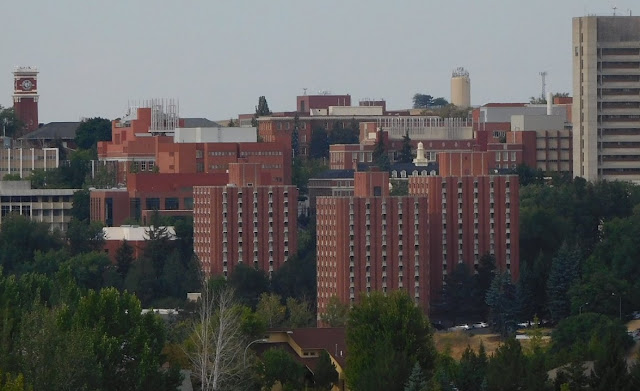 Stevenson Dorms are the brick towers near foreground of this 2017 picture I took of Pullman Skyline during my 2017 bicycle tour.

In many ways, it was an epic summer. In the national news there was Woodstock and Stonewall. I wasn't aware of Stonewall when it was happening, tho. Leaned about that incident many years after the fact.

The moon landing was hyped as a big deal. I was fascinated in it myself tho others in my fairly liberal family were not as enthused as me. They felt the money might be better spent on poverty relief and environmental cleanup. I kept saying that pushing the progress of science could also help other things; like environmental cleanup.

The TV networks covered the moon landing all day. As they waited for the various events, such as the landing and then a few hours later the walk, there was lots of airtime to fill up. They had interviews and special features. They even interviewed folks who believed that the walk was a hoax and the whole thing was staged in Hollywood.

All day coverage had me glued to the TV as I find science a lot more interesting than things like day time soap operas. That's one reason why the TV tube went out at the critical moment, but we all took it in stride. Normally, I'm not a fan of TV. I listen more to the radio.

Back in 1969, I made a reel to reel tape with some radio coverage of the Apollo Missions. I still have that tape today. It's in good condition, but unfortunately, during my college years, I recorded over a big part of it to do a tape exchange with a pen pal about another topic.

Also related to summer of 1969, Stonewall. I wasn't aware of the Stonewall Rebellion until years later.

Sculpture I made in a college ceramics class about Stonewall. That 1969 event I didn't hear about. My first impression was the Stonewall Halfway House and Drug rehabilitation center in Seattle for gay people. The Stonewall House. I saw an article about that Seattle institution as I looked at publications that were coming into the Gay People's Alliance Office at WWU, here in Bellingham, where I hung out a bit. I was also taking ceramics. That was around 1976.

With the cone of silence, about gay issues in society, during my childhood, I wasn't aware of the Stonewall Incident till around 1976. I learned about the detox center first then the incident that it was named for sometime after that.

I grew up in a liberal family and gay rights was pretty much respected as a civil rights issue, when it did come out, but it was pretty quiet and information wasn't as available during my childhood as it is today. I must have not had the radio on when the Stonewall Rebellion was happening. It dropped out of the news pretty fast. Unlike the moon landing that was all over the news. 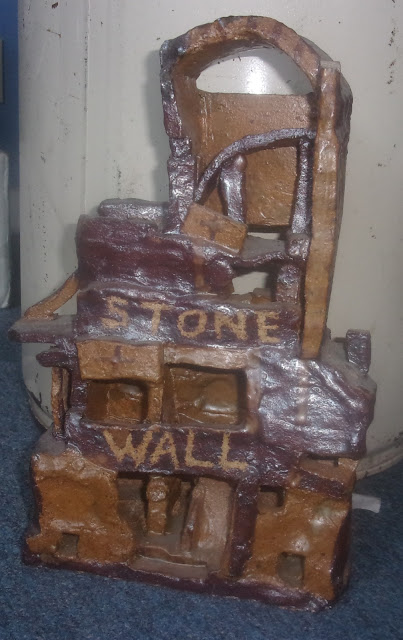 I would like to believe that society is still progressing today. In 1969, there were around 3 billion people on this small planet. Today, over 7 billion are struggling for it's limited resources. We do need to take a lesson from things like Gay Lib. We need to modernize our thinking about family planning and procreation. Not everyone should feel the pressure to procreate. It's okay not to procreate. We have enough people.

To deal with the difficult problems of global warming and limited space on this planet, we need the fruits of our science. Solar panels are an example of a technology pushed forward by the space program. Microchips are similar to tiny homes in my way of thinking. As society progresses, we can also miniaturize to save space on this planet. Smaller families, smaller homes, more sophistication. Our earliest computers hardly did anything compared to the Smartphones of today. They cost millions of dollars, took up entire rooms and used lots of energy. The first ones ran on vacuum tubes; the same tube technology that snatched my ability to watch Neil Armstrong step onto the moon as it was happening.

Today, we have progressed to the tiny Smartphone age tho not everyone sees this as progress. One thing about the tube going out in our TV during my 1969 experience was that it does make for a good story today. It was kind of like an unplugging at just that critical moment.

Someday, if we survive, maybe we will live beyond the confines of this planet, but in the meantime, life on this planet is made better if we look beyond our shortsightedness. Science is one of the best tools we have along with some flexibility in thinking and some patience in our demands from this planet.
Posted by Theslowlane Robert Ashworth at 5:19 PM