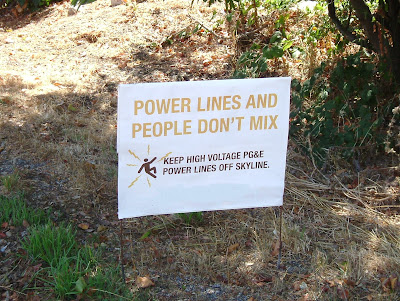 Yard sign I saw during a 2004 bicycle trip in California. Neighbors opposing a powerline.

Thinking about the electric power problems that Texas has just been through, there are a lot of suggested solutions that are contradictory. It's a sign of our times, contradictory ideas pulling in different directions.

One idea is that Texas should not go it alone. Texas has it's own power grid which is more vulnerable to local weather problems than a larger grid would be.

Maybe Texas should stop being so "go it alone" and join the larger community power grids? Either the vast Eastern US grid, or our large Western US grid.

Problem is, the reliability of large power grids works because power can be sent long distances. This is the opposite of the "buy local" mindset.

Here in the west, we rely on huge powerlines that interconnect, for instance, the Pacific Northwest to California. California is able to ride out heatwaves and air conditioning load by purchasing power from out of state. It can buy from the Northwest and even power that's normally allotted to British Columbia.

During cold winters, we often rely on help from California's generating capacity which is seen as excess at that time.

On the other hand, there are people that don't like big powerlines bringing power from distant regions through their neighborhoods. Another idea, of course, is to go more local. Alternative energy; such as windmills and solar power, can go both ways.

Quite a few people have the dream of being independent from the grid. "Just have your own solar panels plus the batteries needed for times when the sun isn't shining."

That's an alluring idea, but sometimes the sun doesn't shine, that much, for a long time. Batteries aren't great yet, but even the best of batteries do run out eventually. Then you need power from somewhere far away where the sun is still shinning, or a fossil fuel plant is still running. Maybe a nuclear plant that's still running.

To some extent, we may have to learn to live with power that's more intermittent; like the wind and the sunshine, or we have to put up with things like big powerlines and nationwide power grids. Big power companies and / or government systems; such as the Bonneville Power Authority (BPA) here in the Pacific Northwest.
Posted by Theslowlane Robert Ashworth at 12:56 PM