Learning to live without the Keystone XL Pipeline, fossil fuels and even football?

It could be difficult, but our economies, both US and Canada (the rest of the world as well) should really become less dependent on fossil fuels. Big news in Canada these days.

One of Joe Biden‘s first actions once he becomes U.S. president Wednesday will be to slam the door yet again on Canada’s politically fraught Keystone XL pipeline expansion, transition documents suggest.

Canada's prime Minister, Justin Trudeau probably made a big mistake placing so much effort on trying to get those last pipelines built out of Alberta.

Like anyone trying to get elected, there are a lot of tightropes Trudeau had to walk. To not build can be disruptive to the way our economies have worked for many decades. Life is changing and new economies can emerge. There is opposition to oil infrastructure on both sides of the border.

It's not easy to turn that ship around. Giant economies, like giant ships don't turn easily on a dime. Both US and Canada are large and intertwined economies.

Maybe they should have not started construction so the problem of "cut your losses." wouldn't have occurred.

Makes me think of the debt that the WSU football program faces in Pullman. Traditional patterns die hard as in stranded assets, but new beginnings can happen.

Like investment in a fossil fuel, WSU's Cougar Football Team is way in debt. My home town is Pullman, WA.

Well over 100 million dollars. The program is supposed to be self supporting from TV and Stadium ticket sales, but has been running a deficit for several years. Now the situation is compounded by corona virus. Empty stadiums and TV revenue down; especially when games are cancelled due to potential virus in the team "bubble" even with no fans in the stadium.

Should WSU eliminate football, or maybe drop down to a less elite conference (grouping of teams) than the prestigious "big schools" Pack 12?

Football does mean a lot to some people, not necessarily me. Another problem is the investment already sunk into this program. It's hard to just walk away and wonder who pays for the coaches salaries that are already like water down the stream, or the drain, I guess. Who pays for classy athletic facilities that have already been built? 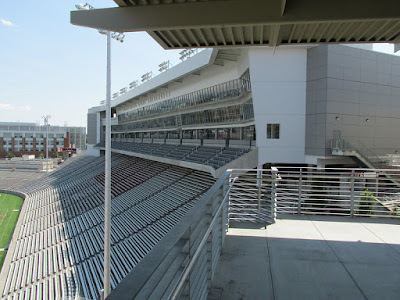 WSU stadium sits empty much of the time
Posted by Theslowlane Robert Ashworth at 8:26 PM