The police do make some mistakes, but they get too much blame for society's problems.

I'll admit I may be writing from a position of white privilege, but I do feel that so much media focus on deadly mistakes made by police usually leaves out some deeper issues. These mistakes are bound to happen in tense situations.

Conservatives will say that the violent crime rate is higher in black neighborhoods. Maybe better to say in poor neighborhoods. Discussing underlying causes of these problems is valuable.

I only have my own opinions, but I think about things like restrictive "single family" zoning and it's contribution to the high cost of housing.

Segregation is often an unintended consequence of things, in society, that are designed to protect people's wealth and peace of mind. In the past, there was a history of more overt racism behind lots of urban planning decisions, but now many traditions, rooted in the past, continue without the overt stated racism.

I've seen some articles about this. The racial roots of some zoning rules that have been cleansed of their original, 1950s, language, but still are enforce.

I would think that over dependence on the automobile contributes to problems. The way freeways have carved up cities.

There is the problem of traffic stops in the first place. A fear of what's lurking inside vehicles. Who's behind the tinted glass? Do they have a gun? Were they reckless drivers? Are they on drugs? Automobiles, in the hands of the general public, can be very dangerous. I think about the problem of "stranger danger." How wary ordinary people are of folks they don't know. A lot of people fear using public transit for that reason, but is public transit really as dangerous, or unpleasant, as folks perceive?

I think maybe we should all be more accepting of strangers.

There is a lot of suspicion, out there, created by a climate of fear. Media can enhance fear as it often highlights the one in a million type fluke events and crimes when the overall statistics might say that common activities; like driving a car, are more dangerous. More dangerous than, say riding a bus with unknown passengers. 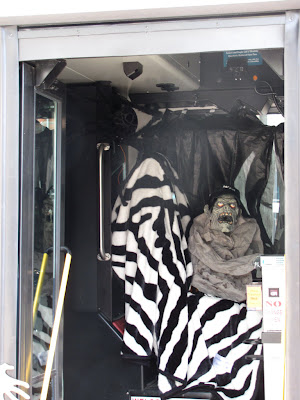 When people get to know each other, fear usually diminishes. Problem is that in most situations, there isn't time to develop a rapport with people we encounter.

I'm a bit shy on first contact with people, but, if the opportunity is there, I am pretty open to meeting new people. I don't worry too much about privacy or being out there in public. Still, I avoid things out of fear as well.

Some folks are very insular and stay in their small world of friends. That's a common part of human nature. Other folks are more open to mingling with the public, with the diversity that the public mix brings.

Maybe we do need to be more tolerant and not allow as many things to annoy us. Sometimes, though, people can be annoying and even outright dangerous. There are times when one has to call a spade a spade. I would think that the police aren't usually going out there arresting people without cause.

The police have to deal with things all the time. People and situations that other folks, including myself, tend to avoid. Part of the problem is the way our society tends to isolate people from one another. It's kind of a natural cliquishness. I think a lot of the problems, related to the police, are more the symptoms of human tendencies. Things that would cause everyone to have to rethink their own tendencies.

As for stranger danger, here is a funny thought I often have walking on the sidewalk. When I see some young people heading my direction on skateboards, my first thought is often, "they are cute." My second thought is to jump out of the way.

Fortunately, I am still quite agile so jumping out of the way works. Also, even if I didn't jump, they can almost always swerve around me anyway. They are kind of fun to watch.

My point being to try and have a different mindset than fear, or anger is often a good strategy.
Posted by Theslowlane Robert Ashworth at 11:41 PM