It looks like construction might be starting on the waterfront condos that they started digging the foundations for and then stopped for some reason (I posted about below). Now it looks like things may be moving forward again according to a recent Herald article (October 25 2021) which might be behind a paywall for some people.

I picked up a recent Whatcom Watch newspaper (October 2021) with a big article about the many complexities at the second Harcourt construction site in Bellingham's waterfront redevelopment district.

It's basically still just a hole in the ground. Everything from worries about rising seawater to the virus has troubled this large project. 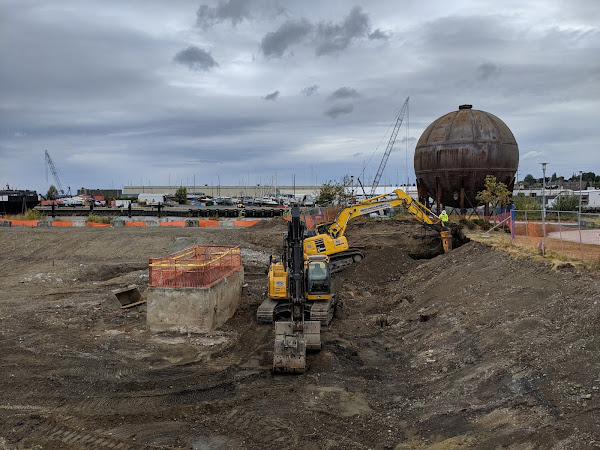 My image from about a year ago.

Without going into all those details, I got to thinking about a concept that is talked about in the Strong Towns Facebook Group. Incremental development. Often development evolves from small scale to larger scale over time; like as a small town, or neighborhood, grows up and densifies.

Seems like one of the problems with this waterfront district is that people have been trying to plan for the final outcome, right from the start. Planning the outcome before knowing what developments would want to move into that district, or where the money would come from.

People have debated, "how dense should it be?" "How tall should the buildings be?" "Should it all be park instead?"

No one knew what would naturally evolve there. By naturally, I'm meaning what the market, or taxpayers would bring. Maybe I shouldn't use the word naturally, here.

If truly left to nature, it would evolve into weeds growing up out of gravel. 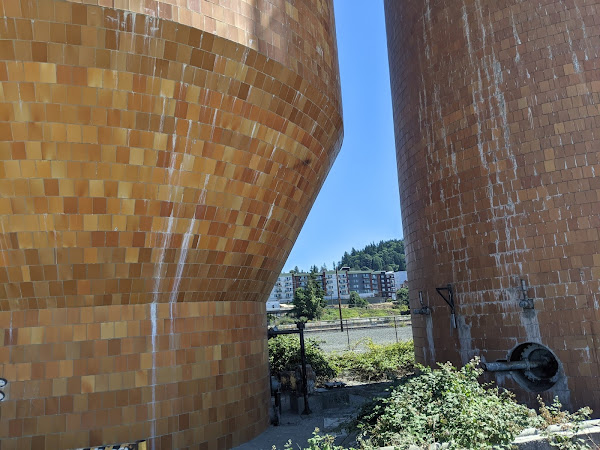 Old Georgia Pacific pulp tanks awaiting new use such as for art.

Long before I knew about the Strong Towns Facebook Group, I remember thinking it's hard to plan out the waterfront in a vacuum. Not knowing who, or what would have the money, or demand to build there. At start, I guess the plans can't be rigid.

Since those early days of waterfront planning, after the Georgia Pacific Pulp Mill closed, the planning situation has improved, or at least introduced more of the concept of flexibility, I guess.

After that area sat empty for many years, while plans came and went. The Port District seems to have basically said, "lets get something started down there." Now there are some portable, or what are called "pop up" businesses going in that area. A beer garden, an ice cream place and so forth.

There is something called a pump bicycle track. These things seem to be successful. They are fairly small scale and can be moved around as more things come in. Portable type buildings. 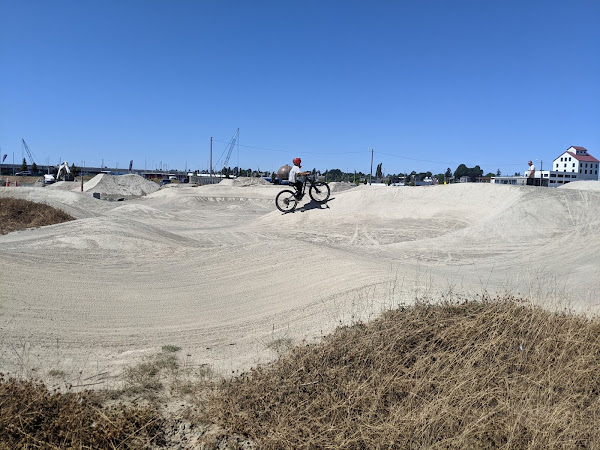 Harcourt has succeeded, I think, in converting the old Granary Building into new use. From what I read, it is mostly leased now with small businesses and office use. In background right above picture.

The larger projects and plans, based on what people thought the area would look like in 50 years, are stumbling at best. Meanwhile, smaller and more flexible development is starting to take hold.

Good to see the street, park (Waypoint Park) and the bike paths there. I would understand if those things had to change course a bit, like relocating a bike path around a building at sometime in the future; if need be. 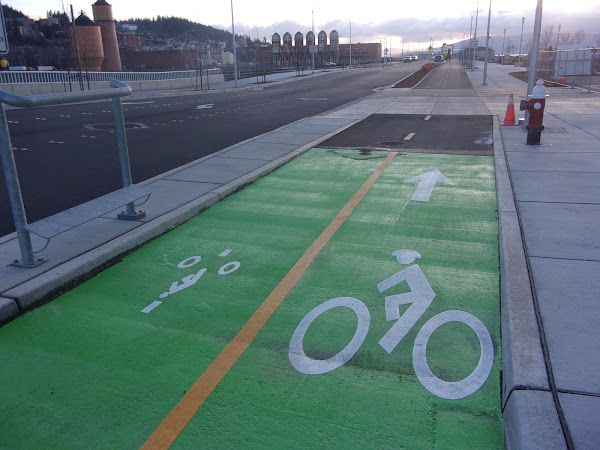 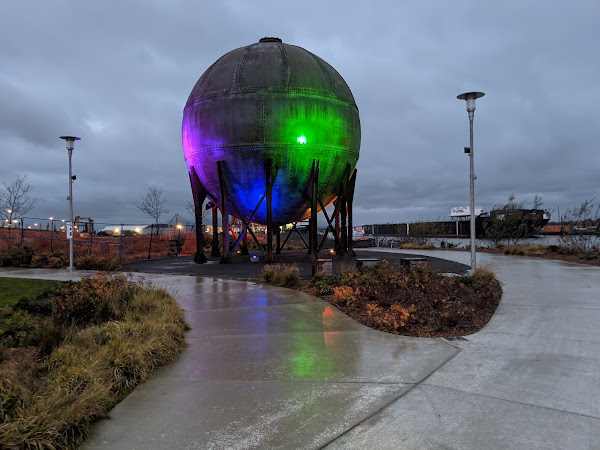 Western Washington University was talking about putting something like a branch campus down there, a few years ago. That plan is at least on hold. It would have been in one section of that neighborhood.

Meanwhile there are some things starting down there and those things may change and move around a bit as future developments happen. Hard to predict, at first, just what shape it might take, but like so many towns and neighborhoods, the changes are often incremental and evolutionary.

See some of my photos about Bellingham, WA. Waterfront Redevelopment District.
Posted by Theslowlane Robert Ashworth at 2:15 PM