Could a desalinization plant, on the Gulf of California in Mexico, irrigate California's Imperial Valley? 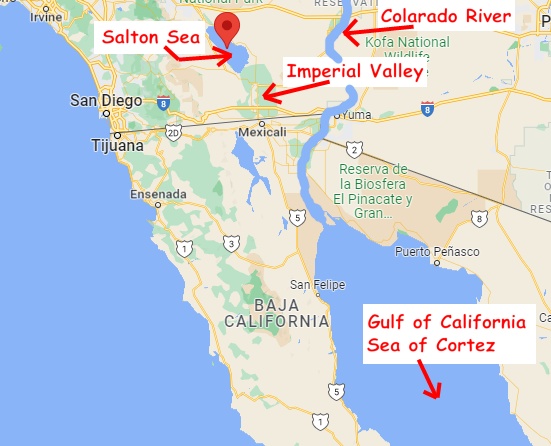 There is some talk of piping water all the way from the Mississippi River to the Colorado. Expensive for sure.

I've come up with my own idea for putting more water in the Colorado. One of the big users of Colorado River water is the Imperial Valley in California. That's a big agricultural area right on the Mexican Border south of the Salton Sea. I think it's actually a bit below sea level.

Maybe they could build a desalinization plant on the Gulf of California, in Mexico, to provide water to that area. It might even be able to use a mostly gravity feed pipe or canal down to the Imperial Valley from Gulf of California.

Desalinization could provide fresh water for both the Imperial Valley and parts of Mexico. Those areas would no longer have to be so dependent on Colorado River water.

I know that the idea of desalizazation may not pencil out economically for agriculture. Desalinization is an expensive process. Too expensive to provide water cheap and abundant enough for agriculture. Farming needs a cheap source of water, unless it's hydroponic; like indoor agriculture; Another topic. That might sink my "Gulf of California / Imperial Valley" idea, but I still present that idea here, at least.

Bringing water all the way from the Mississippi would be expensive as well.

Update: Other folks came up with a similar idea, but a board says it's not viable.

I found an article in October 5 2022 Los Angeles Times, made free on Yahoo News.

As Salton Sea faces ecological collapse, a plan to save it with ocean water is rejected.

That board suggests another strategy for mitigating the dust from the Salton Sea that is drying up. They want to plant stuff to catch the dust and also have some farmers transfer their Colorado River water allocation to Salton Sea. Let more water flow into the Salton Sea.

That might mean much less food from Imperial Valley, however. It also might still mean little water as there is not much water, from the Colorado River, to work with.

We'll see.
Posted by Theslowlane Robert Ashworth at 9:48 AM