Picture of a billboard remembering Queen Elizabeth II. Time for my own reflection as well. 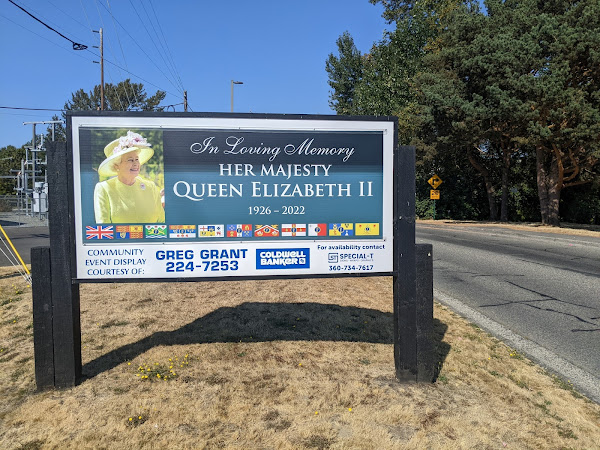 A realtor's billboard where most of the space is devoted to various public service announcements. This time in memory of Queen Elizabeth II.

Some of my thoughts.

Given the bad human rights record in many "so called" republics around the world, it seems like a lot of folks, including me, have warm feelings for United Kingdom's form of constitutional monarchy.

Aside from just the gentle monarchy, quite a few folks feel that UK, or Canada's Parliamentary system is better than even our US system of government.

A monarch isn't necessary, however. It's just that there are so many authoritarian governments around the world that the British system is like a breath of fresh air.

Queen Elizabeth's period spanned a lot of changes in technology and society. From 1953, a few years before early computer scientist Alan Turing was castrated, in Britian, for the crime of homosexuality, to gay marriage being celebrated in UK and many other nations.

From a time when computers barely existed as large expensive machines with gears and vacuum tubes to the more powerful smartphone in one's pocket.

What would Turing think of the app called Grinder, if he were to be transported from the 1950s to the 2020s?

Queen Elizabeth served quietly and kindly as society evolved around her.

I was born about a year after her term began, so it spanned much of my own lifetime.
Posted by Theslowlane Robert Ashworth at 11:53 AM