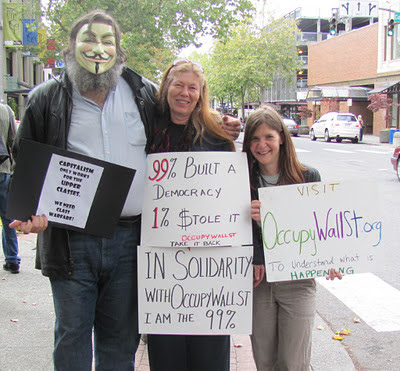 There's a rally planned for corner of Magnolia and Cornwall, Old Federal Building corner, Friday October 7 at 4 to 7 pm.

Someone handed me a flyer that says "all peaceful people and families welcome."

Old Federal Building has been the site of Friday peace vigils for years, since the late 1960s and more recently the location of Food Not Bombs, a free community food table.

Looks like there's going to be quite a turnout in Bellingham as well as other cities all across the nation as people are getting more frustrated with things like long term unemployment, growing disparity between super wealthy and the rest of society, decline of the middle class, cost of the state of war that never seems to end and looming threats of more budget cuts, lack of safety net and other things that folks can add to this list.

On Facebook, I saw an insightful cartoon showing Wall Street executives deciding to "occupy Main Street." On Main Street they found closed businesses, foreclosed houses and high unemployment so they said, "Well, now we know why they have all that free time."

The cartoon brilliantly cuts both ways addressing criticism that "protesters have a lot of time since they don't have to go to work." When unemployment goes up, people are likely to have more time for things like protests and civil disobedience. Executives, be advised.

Above: In front of Bank Of America on Thursday at Holly and Cornwall.
Below: At Holly and State. 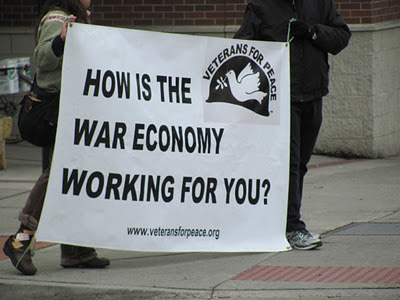 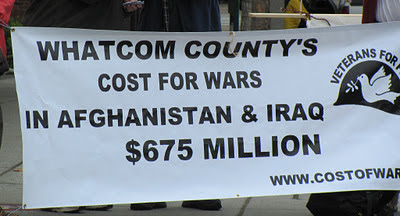 I cut it out of picture accidentally, but it's www.costofwar.com. 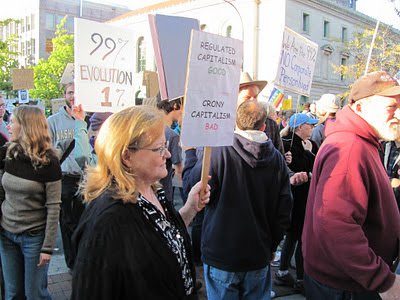 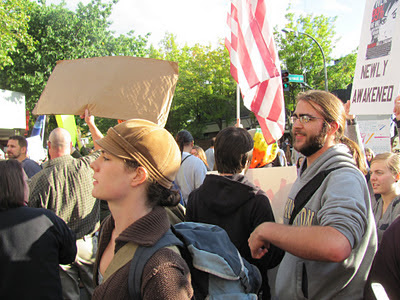